New evidence that lactoferrin reduces the prevalence of tummy troubles in toddlers.

A sick child can throw your life upside down, but new research shows lactoferrin may help. Recent Japanese research showed children with an increased dietary lactoferrin intake had a 33% reduction in the prevalence of diarrhea, vomiting and fatigue. The study involved children aged 12 – 32 months old that were given growing up milk with added lactoferrin and then compared to a “control” group that did not receive the added lactoferrin.

This is welcome news, especially for the 61% of Australian families now having both parents in the workforce. Mild illness and infection during winter are facts of life for many preschoolers, but advances in nutrition means there are many ways we can now support the health of our children’s immune system and minimise disruption for kids and parents alike.

Lactoferrin is one nutrient receiving increased interest from researchers for its beneficial effects on the immune system, specifically in infants and younger children. Its origins give clues to why it works so well. Lactoferrin is a key protein in breast milk, where it can be found in abundance in both colostrum and the mature breast milk and works in many ways to support an infants gut-immune health. This powerful protein is also a component of our immune system and is considered part of the bodies first line of defence against infection.

Further information on the study results below. 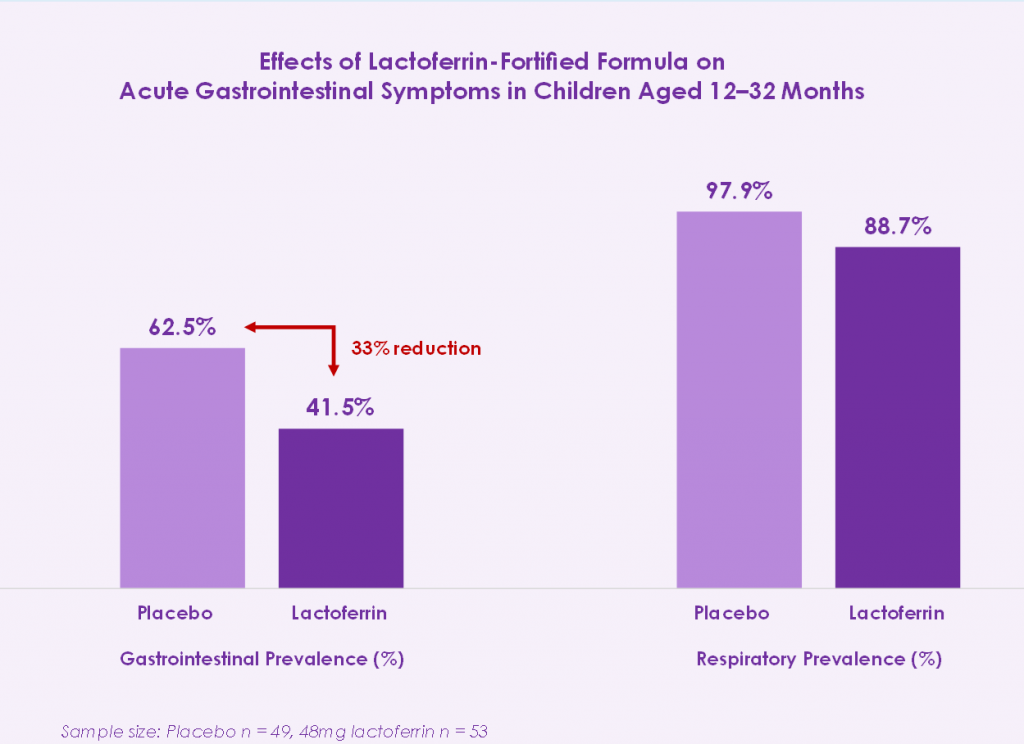 A randomised, double-blind, placebo controlled study by Motoki et al. in 2020 evaluated the efficacy of lactoferrin from cows milk (bLf) added to growing up milk in preschool aged children. The primary study outcome was the prevalence of respiratory and gastrointestinal symptoms. Japanese children aged 12-32months were enrolled in the study and randomised into two groups, 101 children completed study. The 53 children in the treatment group were provided 48mg of bLf a day, added to a growing up milk. While the 48 children in the control group received only growing up milk. The prevalence of symptoms was reported by parents during the 13 week trial.Those children in the treatment group demonstrated a 33% reduction in the prevalence of acute gastrointestinal symptoms, which include diarrhea, vomiting and fatigue whereas the acute respiratory symptoms were comparable between the groups.

The study highlights the consumption of lactoferrin in growing up milk supports a decrease in the prevalence of acute gastrointestinal symptoms in children 12 – 32months.

Interested to know more about the benefits of lactoferrin in children 3-6 years? Read the article here